Renewable energy provider Good Energy has been shortlisted for a national award in recognition of its pioneering efforts in clean energy and combatting climate change.

The Chippenham-based firm is a contender for the inaugural New Statesman Positive Impact Awards, celebrating the work done by individuals and organisations to create real lasting change.

It has been shortlisted in the Positive Impact in Energy Award, to be judged by a panel which includes New Statesman political editor Andrew Marr.

The winner will be announced in London in December.

The Good Energy nomination focuses on its ‘Meet the Generators’ campaign to celebrate the network of 1,700 independent generators – such as solar farms, wind turbines and hydroelectric projects – which supply it with power.

Last year they provided enough energy for the equivalent of all the homes in Manchester for more than a year and contributed to customers saving more than 100,000 tonnes of carbon emissions.

The campaign, which includes a series of films available to view at www.goodenergy.co.uk/learn/generator-stories, has helped to attract local, regional and national media coverage of renewables.

Good Energy chief executive Nigel Pocklington said: “We’re very pleased to be shortlisted for such a prestigious national award, especially at a time when everyone is increasingly interested in where their power is coming from.

“The UK needs to drastically reduce its reliance on fossil fuels so it’s important to celebrate the success of the independent generators helping to make the world a cleaner and greener place.

“We hope their stories will encourage others to invest in renewables and join us in tackling the climate crisis.”

Good Energy was the first energy company to be approved as a ‘100 per cent renewable electricity provider’ by the Good Housekeeping Institute and has been accredited as a top-scoring Eco Provider for energy by Which?.

This year, for the second year in a row, all of its tariffs received the highest ‘Gold’ classification in the Uswitch Green Accreditation scheme.

One of Wiltshire’s largest not-for-profit solar energy enterprises, Wiltshire Wildlife Community Energy (WWCE) Ltd, has launched a new advice service to help residents across the county reduce their carbon emissions and save money on spiralling energy bills this winter. […] 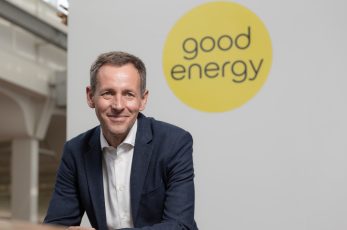 Renewable energy supplier Good Energy has slammed industry regulator Ofgem for criticising the way it deals with vulnerable customers. In a report published this morning (Tuesday) Ofgem told 17 energy firms to make improvements to the way they deal […]

Good Energy commits to slashing emissions by half

Juliet Davenport to step down from Good Energy board